ACE inhibitors and Ibuprofen – Any link to COVID severity?
March 27, 2020 by Wendi 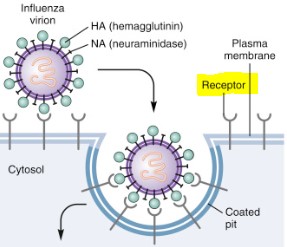 What type of receptor does COVID use?

COVID-19 infects epithelial cells, the cells that line the respiratory tract and has a surface spike protein, called S protein that binds to a receptor called ACE2 – Angiotensin Converting Enzyme 2, the same as SARS.  Other Coronaviruses that cause milder common cold use different receptors.

ACE2 receptors are found in high concentration on type 2 alveolar cells….these are cells in the air sacs of the lungs where oxygen and carbon dioxide are exchanged, also in goblet cells that produce mucus, and the ciliated epithelial cells in the upper airways.  ACE2 receptors are also expressed on epithelial cells in the esophagus, tongue, and lower part of the small intestine and colon, which is why some people can have digestive symptoms, such as diarrhea…. explaining the toilet paper shortage.  The highest expression of ACE2 has been found to be the goblet cells and ciliated cells in the nasal cavity and upper airways, which is one reason why it is so easily transmitted.

The severity of infection can be related to the number of ACE2 receptors found on a person’s epithelial cells, the more receptors, the more opportunity for the virus to attach and infect cells.  There is an increase in disease severity in people that have heart disease.  Common medications taken by people with high blood pressure are ACE inhibitors.  Angiotensin converting enzyme is normally expressed in the body in response to a decrease in blood pressure, which then converts angiotensin 1 into Angiotensin 2 that has several functions that increase blood pressure.  In people with high blood pressure, drugs that block the function or binding of ACE will prevent the increase in blood pressure.   BUT, the body has a cool way of regulating things.  When people take a drug that blocks a molecule, sometimes the body compensates by increasing the number of receptors to try and compensate.  Perhaps people with heart disease have a more severe COVID infection because they take medications that inadvertently increase the expression of the exact receptor the virus binds to. At this time there is not enough data to draw concrete conclusions.

Another interesting study shows that an increase in ACE2 reduces the severity of acute respiratory disease syndrome and that ACE2 blockers upregulate ACE2 and it may have PROTECTIVE effect.

At this time there is no recommendation for people with heart disease to stop or change their medication, do not change your medication without talking to your doctor.

Ibuprofen is a type of drug called an NSAID – Non-Steroidal Anti-Inflammatory Drug. On Mar. 17, a study in the British Medical Journal stated that Tylenol (acetaminophen) would be better for treating COVID symptoms than Ibuprofen because Ibuprofen might exacerbate the condition.  Experts said that complications of respiratory infections may be more common when NSAIDs are used because it can dampen the inflammatory response and slow recovery. Covid-19 reduces a key enzyme that part regulates the water and salt concentration in the blood and could contribute to the pneumonia seen in extreme cases. “Ibuprofen aggravates this, while paracetamol does not,” he said.

Another article published in Science on the same day says this is misguided drug advice and that there is no scientific evidence to suggest that NSAIDs put people at higher risk of a more severe disease.

NSAIDs block the production of molecules called prostaglandin synthases – cyclooxygenase 1 and 2, COX-1, and COX-2.  Ibuprofen blocks both COX-1 and COX-2. Prostaglandins cause fever and aching during viral infections.  Prostaglandins also dilate blood vessels and are involved in both increasing and decreasing inflammation.  NSAIDs do not block or inhibit any of the immune cells, like cytotoxic T cells or Natural Killer cells that target virus-infected cells. In 2003 the SARS coronavirus bound to the COX-2 promoter and increased the production of prostaglandins and may have been involved in immune over-reactions causing cytokine storms, which NSAIDs would reduce.  There is also evidence that an NSAID called Indomethacin can block coronavirus RNA synthesis, which would inhibit its ability to replicate. 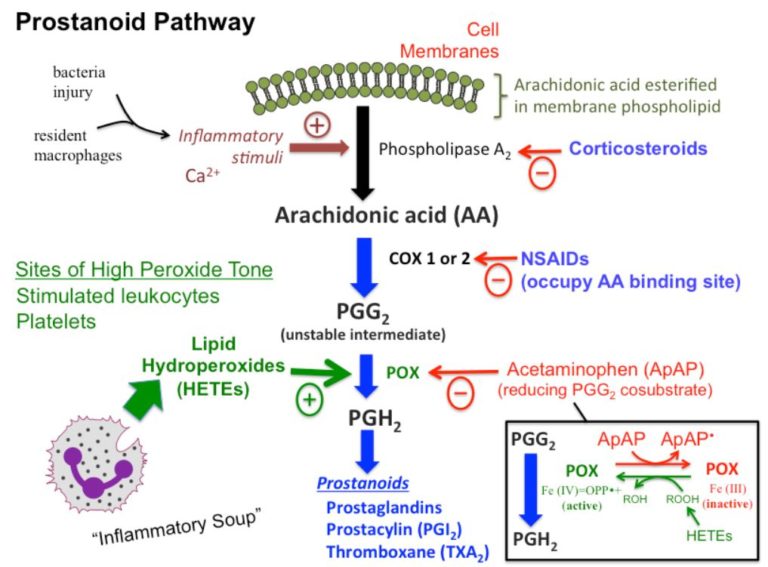 There are many factors involved in evaluating the effects of drugs on different people, other drugs they may be taking, age, sex, environmental exposures, health status all have a significant impact.  There is not enough data at this time to say definitively that NSAIDs increase the severity of COVID infection and it may even have beneficial effects at reducing excess inflammation.  Tylenol (acetaminophen) can also be used to reduce aches and fever.  The exact mechanism of action of acetaminophen is not known but the it is thought that it primarily affects neurons in the brain to reduce pain and fever but has no effect on inflammation.  If you have a mild COVID infection, the current evidence suggests that NSAIDs would not be a problem.  People with clinically complicated COVID should go to the hospital for professional evaluation of all factors including any other health conditions and medications so that the best treatment can be determined.

Hiding in Plain Sight: an Approach to Treating Patients with Severe COVID-19 Infection

Covid-19: ibuprofen should not be used for managing symptoms, say doctors and scientists (Mar. 17, 2020)

Next article Curcumin has antiviral properties