What makes us omnivores?
December 8, 2019 by Wendi

A comparison of species that are carnivores, herbivores, and omnivores

Carnivores are animals that feed primarily on other animals. Obligate carnivores only eat other animals to survive and include felids (cats) such as lions, tigers, bobcat, lynx, leopard, cougar, jaguar, cheetah and domestic cats. Obligate carnivores lack the physiology to digest vegetable matter.  Cats will only eat plant material such as grass as an emetic (to make them vomit). Facultative carnivores can eat some plant material but eat primarily meat, this includes all other carnivores including gray wolf, coyote, red fox, wild and domestic dogs, hyenas, polar bears, ferrets, dolphins, seals, walruses, Tasmanian devil, hawks, vultures, falcons, owls, penguins, pelicans, herons, frogs, toads, snakes, crocodiles, monitor lizards, komodo dragons, some turtles, seagulls, sharks, many bony fish like salmon and tuna, octopuses, spiders, scorpions, water bugs, and many insects. Some sources say that dogs and foxes are omnivores because they can digest some plant material.  Carnivorous plants consume insects, and carnivorous fungi consume invertebrates like nematodes and amoeba.  Carnivores can also be insectivores (eat insects), piscivores (eat fish), cannibals (will eat organisms of their own species, like shrimp, sand tiger sharks, spiders, and chimpanzees will sometimes eat other chimps but they are omnivores).

Herbivores are animals that feeds on plant. Herbivores can be classified as fruit-eaters, seed-eaters, nectar-feeders, or leaf-eaters.  Plant cell walls are made of cellulose, which require specific enzymes or microorganisms to digest.  Many herbivores have an extra pouch after the stomach called a rumen that contains a large number of bacteria and other microorganisms that ferment the leaves.  Some ruminants regurgitate from the rumen to re-chew the leaves for increased breakdown.  Fermenting microorganisms synthesize some vitamins.  Examples of fruit-eaters include bats and flying foxes. Ruminants  include sheep, cows, goats, moose, water buffalo, yaks, reindeer, elk, deer, bison, antelope, and gazelle.  Other leaf-eaters include pandas, caterpillars, grasshoppers and other insects, giraffes, koalas, quokka, possums, gliders, wombats, kangaroos, wallaby, rabbits, elephants, hippos, and iguanas.

Omnivores are animals that eat a variety of both plants and animals. They have the physiology to break down both muscle and fibrous and starchy plant foods. They lack the large chamber for fermentation and therefore cannot digest very large amounts of fibrous material like ruminants but they do have fermenting microorganisms in their digestive tract that help digest a great number of various plant foods. Omnivores are physiologically able to digest meat but they do not have an absolute requirement for it unless there is no other practical source of vitamin B12 (cobalamin).  Animals that are physiologically able to effectively digest both animal and plant materials include rodents, chickens, pigs, raccoons, opossums, skunks, badgers, bears, robins, crows, some reptiles, squirrels, chipmunks, emus, magpies, ravens, ducks, rhinos, sloths, mice, foxes, lemurs, chimps, gorillas, gibbons, tarsiers, marmosets, spider monkeys, tamarins, bonobos, orangutans, and humans. Apes eat primarily plants but will supplement their diet with bugs, insects, eggs, birds, frogs, and small animals.  Of all the animals, humans are the most similar genetically and physiologically to the apes, specifically chimps. 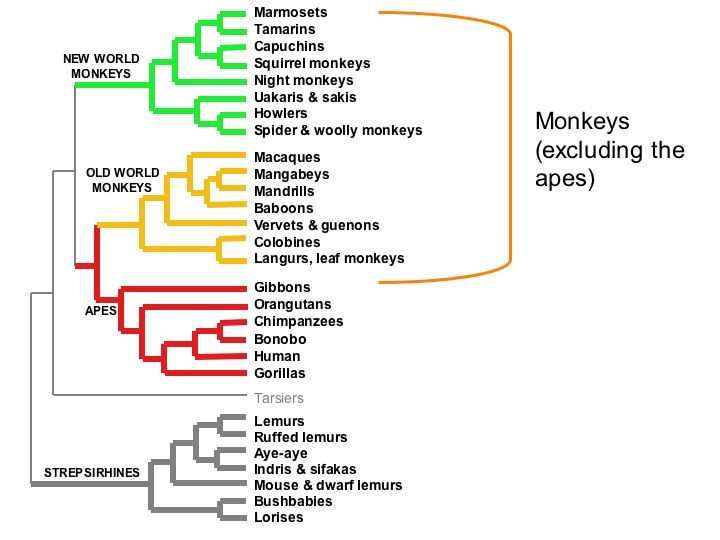 Here is an interesting diagram comparing the stomach acidity of various species. 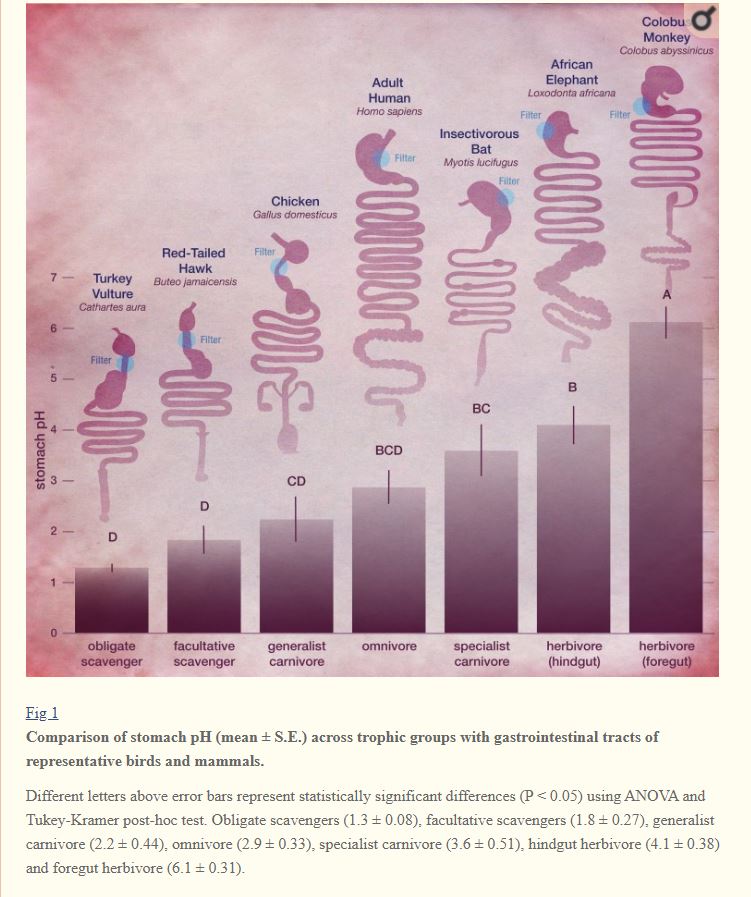 Previous articleMinimizing the impacts of chronic stress. How to decrease cortisol

Next article What factors REALLY have an impact on skin health?