Vaping appeared on the market in 2006 and has become increasingly popular as both an aid for quitting traditional cigarette smoking as well as use among young people that have never smoked before.  It has been promoted as a healthier option to smoking and many people vape without nicotine, just using flavours. But are there health effects to vaping?

There have now been 47 deaths and 2290 cases of vaping associated illness. E-cigarettes involve heating a liquid that is usually composed of propylene glycol or glycerin and flavourings, with or without nicotine or marijuana.  When these liquids are heated, aldehyde by-products are formed that have been proven to pose significant health risks. In June 2019 Canadian Cancer Society reports a 74% increase in youth vaping since 2017.

Studies starting in 2017 have shown that the flavourings in E-cigarettes (there are now more than 7000 different flavours) showed that some of the major cytotoxic effects are due to heating the flavouring substances. Many flavouring molecules are safe for consumption in foods because they are broken down by intestinal bacteria or the liver and don’t cause damage.  Studies are now showing that inhaling these particles into the lung tissue causes extreme damage.

There is growing evidence that vaping, even short term use without nicotine, can cause the following:

What is “popcorn lung”?

The chemical diacetyl (2,3-butanedione) is used to give foods a buttery or creamy flavor. We can ingest this molecule with no issues, however, if inhaled, it has been shown by the FDA to cause acute-onset bronchiolitis obliterans, a severe and irreversible obstructive lung disease, termed popcorn lung.  The term comes from the discovery that when this buttery flavouring substance was inhaled by workers at a microwave popcorn production plant, an outbreak of bronchiolitis obliterans occurred.  And here I thought the term came about because the lungs looked like popcorn!  Glad I cleared that up.

Here is an image of what bronchiolitis obliterans looks like….it is essentially a severe inflammatory response that blocks (obliterates) the airways. 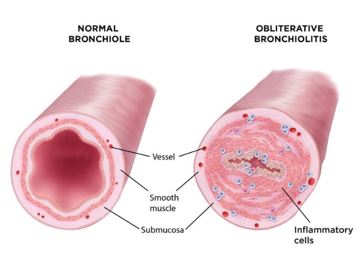 Some people argue that vaping does not cause this condition; that it only happened in the popcorn factory workers.  I am actually having a very hard time finding pubmed research that states any statistics on bronchiolitis obliterans in people that vape.  There is research that shows the same diacyl molecules are found in many flavourings used in E-cigarettes and that inhaling large amounts of diacyl moecules causes this condition but there is no specific data that shows vaping causes ‘popcorn’ lung other than a couple of case studies.

Interestingly, I did find this “Cases of biopsy-proven bronchiolitis obliterans in heavy popcorn consumers have also been reported.” So maybe don’t eat a lot of microwave popcorn either!

Even though it can’t be specifically proven that vaping causes popcorn lung, there is enough research that shows many severe effects on the lungs from inhaling the heated by-products of propylene glycol, glycerin, and flavouring molecules.  The federal government in Canada and the US recommend that people avoid vaping until more is known.

Am throwing my vaping pipe away